The celebration phase of the Fifth Plenary Council of Australia ended on Saturday, July 9, as Archbishop Timothy Costelloe formally closed the Council and celebrated the closing Mass.

After the November 2022 meeting of the Australian Catholic Bishops Conference, the decrees will be sent to the Apostolic See. In accordance with canon 446 of the Code of Canon Law, decrees are not to be promulgated until they have been reviewed by the Apostolic See. They will be promulgated in the Australasian Catholic Record and the website of the Australian Catholic Bishops Conference in accordance with its usual practice. The decrees will oblige six months after promulgation.

The introduction to the Motions and Amendments document also received a qualified majority in the deliberative and can be read here.

Click on the links below to open the decrees (subject to final corrections).

Called by Christ - Sent Forth as Mission Disciples

Witnessing to the Equal Dignity of Women and Men

Communion in Grace - Sacrament to the World

Formation and Leadership for Mission and Ministry

At the Service of Communion Participation and Mission – Governance

Integral Ecology and Conversion for the Sake of Our Common Home

The Implementation Phase of the Fifth Plenary Council

The Decrees of the Fourth Plenary Council of Australia

Click here to read the terms of reference for the implementation of the Fifth Plenary Council of Australia.

Click the link below for more information on the voting that took place during the second assembly.

Many stories and videos were shared during the Council’s second assembly. Click here to read stories and click here to watch videos, including daily Masses, highlights videos and media.

Plenary Council Members approved a concluding statement at the end of the second assembly. Click here to read the statement.

The timeline below describes key moments in the Plenary Council journey, including the lead-up to the second assembly and beyond. We invite you to walk this journey with us. 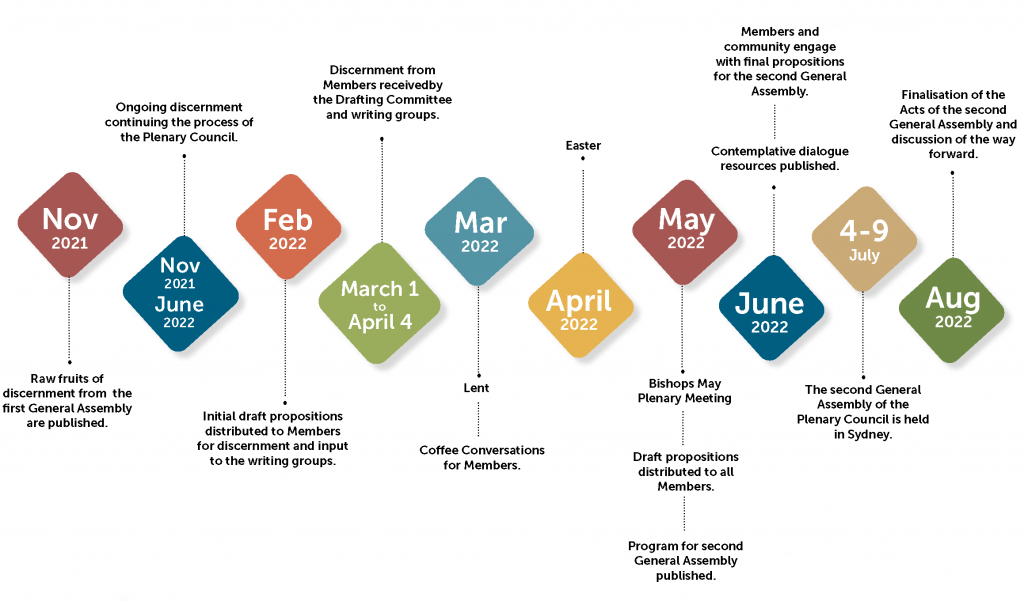 Plenary Council Members experienced a wide range of emotions during the Council journey, and especially during the two assemblies. After the second assembly concluded, Members were invited to — if they wish — share a reflection on their personal experience, as part of a larger group drawn from the People of God across Australia.

Many members have agreed to have their reflections published on the Plenary Council website. Here are some excerpts from the reflections.

—
The four-year journey of the Fifth Plenary Council of Australia will reach the second – and final – assembly in July 2022. At the Second Assembly, the 277 Council Members will consider the motions that have emerged from that national journey, with the goal of renewing the life and mission of the Church in Australia.

The Plenary Members having their picture taken after the Closing Mass of the Second Assembly of the 5th Plenary Council of Australia.

To know more about the members, click here:
plenarycouncil.catholic.org.au/members/

In 2018, when the decision to hold a Plenary Council was announced, the entire People of God in Australia began preparing for this historic moment by listening to God and by listening to one another’s stories of faith.

More than 222,000 people participated in Phase I: Listening and Dialogue, contributing 17,457 submissions.

In October 2021, the Catholic Church in Australia will gather for the first Assembly of the Plenary Council to be held since the second Vatican Council.